Ty Granderson Jones is a descendant of Creole and Cuban heritage. He’s a trained actor, a protégé of the iconic theatre director, Alan Schneider and a former student of the iconic acting teacher Lee Strasberg. He has a BS in Theatre from FAMU and FSU as a co-op student, and an MFA in Acting {achieved under the auspices of mentors Michael Addison and Arthur Wagner} from UCSD— one of the top acting programs in the world. 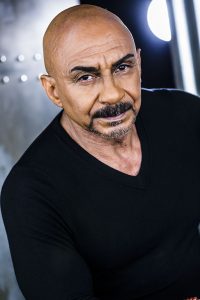 His film and television credits include co-starring in the classic action film “Con Air”, co-starring in the #1 box office hip hop cult classic “CB4” from Universal Pictures, Oliver Stone’s Oscar nominated “Salvador”, starring as the villainous Max Rice in the urban cult classic indie Tapped Out from Madonna’s Maverick Entertainment (silently produced by Prince), “Window of Opportunity”- an underground political thriller from producer John Densmore of The Doors, recurring as Cue Ball Rodriguez on the critically acclaimed classic series “ER” on NBC, and the Golden Globe nominated “Everybody Hates Chris”.

His theatre credits include the award winning play “Rounds”, Niggaz with Attitudes and Big Gunz” {earning him an ADA Award nomination for Best Actor}, the Los Angeles premiere of Buffalo Soldier {earning him the NAACP Image Award for Best Supporting Actor}, from Broadway– the Los Angeles premiere of August Wilson’s “Joe Turner’s Come and Gone”, the West coast premiere of Lanford Wilson’s “Balm in Gilead”, the 20th Anniversary of the Negro Ensemble Company classic “Ceremonies in Dark Old Men”, and “The School for Scandal” at the Tony Award winning South Coast Repertory. Ty has performed in over 80 plays.

He’s a published Poet and has performed his original works featuring John Densmore of “The Doors” on drums. As an accomplished filmmaker via his company Creole Celina Entertainment (www.CreoleCelinaEnt.com), Ty wrote, produced, directed and co-starred in his award winning political action thriller “Diamond” currently streaming on Amazon Prime. His other award winning films include “Napoleonic”, an official selection at both Martha’s Vineyard Film Festival, and Action on Film International Film Festival garnishing nominations for Best Film, and for Ty– Best Actor, and “Tale of Two Dragons”– also an official selection. Ty and his company are currently developing film and television projects.

Ty’s also an accomplished Muay Thai Fighter, a Cowboy and a testament to a journey of redemption, overcoming the mean streets of Tampa Bay, Florida and moving on to believe and achieve, make his dream real in Show Business as an accomplished actor, screenwriter, filmmaker and teacher. His journey is celebrated in the award winning Hollywood Photo Journal “Mugshots” along with other noted talents, i.e. Danny Trejo, Eric Roberts, Emilio Rivera, etc.

Heartbroken💔We've Loss One of the Greatest 🎭 Actors and Humanitarians to Ever Walk the Planet 😔I am Grateful to Have Been Graced by SIDNEY POITIER'S Presence While Performing on Stage in August Wilson's "Joe Turner's Come and Gone" Opposite the Late Roscoe Lee Browne-- the...

"40 DAWG" 🎥 One of my most notable characters in Classic Hollywood Cinema 🎬The Hip Hop Comedy Classic "CB4" from Universal Pictures with my boy, the late Charlie Murphy 😔And the brilliant Chris Rock 👏Who's idea influenced the future of Hip Hop🎼💯